It’s been over a year since Jim died. But I still can’t “get over” that last day. I am almost obsessed with that day, going over and over the events, and feeling my heart break over and over again.

For about five years, we had been dealing with chronic heart failure and interstitial lung disease from Agent Orange poisoning in Viet 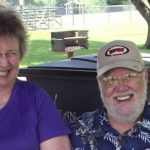 Nam. The cardiology and pulmonary teams knew us well, as they kept tweaking his medications, adding new medications as needed, and testing everything, all with the goal of keeping him alive and functional.

By early January 2018, after three weeks that involved three calls to 911 and three ER visits and hospitalizations, a doctor told us Jim was in end stage heart failure, and that our choices after that last hospitalization were assisted living, nursing home or hospice care.

Jim and I talked about these choices. He felt VERY strongly that he could not survive another hospitalization “where they’re trying to murder me.” We knew that in assisted living or a nursing home, they would have to call 911 when (not if) he developed breathing problems (just as I had done the past three times). So the only choice was the Hospice House.

When we were admitted to Hospice House, Jim improved greatly for about a week due to: the de-prescribing of many of his 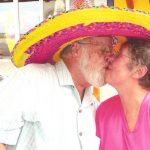 medications; the kind and understanding staff who honored his need to be in control of his daily life; his ability to sleep through the night without the need for constant assessments and blood draws; his freedom to move without a lot of IVs and monitoring devices.

And then of course, his diseases took over. Gradually he became more short of breath and less able to take care of himself. Our only discussion of his impending death involved his pall bearers. After that anxious and frightening discussion, we both pretended that none of this was happening.

Sixteen hours before his death, the hospice staff placed Jim into his bed for the last time. He knew me right up until the end. He was very sleepy and couldn’t talk because he needed to use his energy to breathe. But he kept squeezing my hand in response to my words.

I wanted so much to crawl into bed with him and hold him, but I feared it would increase his breathing problems. So I sat by his bedside holding his hand and reminding him of how much I loved him. Right to the end, he squeezed my hand to let me know he heard me.

In the last hour, his breathing slowed and got very irregular. I told him that it was okay that he let his life go, that I would be alright, and that he needn’t worry about me. In the seconds before he breathed for the last time, his eyes opened wider than I’d ever seen before and a look of amazement and joy shone in his eyes. Then the light went out of his eyes.

I can’t stop seeing the look in his eyes before the loss of light in his eyes. Some people have told me that the look was only brain hallucinations before death. I choose to believe that Jim saw heaven and was awed. And I believe that he is in heaven waiting for me.

Editor’s Note: We previously published Leah’s “A Letter to My Husband on the First Anniversary of Your Death.” If you missed it, click this link:  A LETTER…

We are James and Leah Cumberworth from Davenport, Iowa.