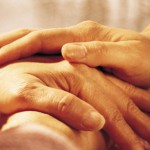 “What the dead don’t know piles up, though we don’t notice it at first. They don’t know how we’re getting along without them, of course, dealing with the hours and days that now accrue so quickly, and, unless they divined this somehow in advance, they don’t know that we don’t want this inexorable onslaught of breakfasts and phone calls and going to the bank, all this stepping along, because we don’t want anything extraneous to get in the way of what we feel about them or the ways we want to hold them in mind.”

Roger Angell is a famous sportswriter and The New Yorker contributor. His daughter Callie died of suicide in 2014.