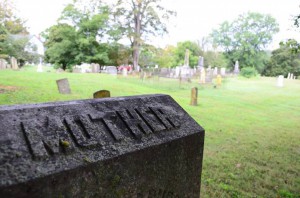 My mother loved clothes.  She kept them well.  She wore them well.  In the years after we all left home, in the years after my father’s death, she began allowing herself to buy more and more clothing.  Never anything too expensive or extravagant.  She didn’t need that.  She could turn Walmart into couture simply by putting it on.  She loved crisp, clean lines.  She loved blazers and starched button downs and pairs of what she called “good shoes”.  She loved silk scarves and the wide, shiny rings she called “bling” in her later years.

All she ever wanted to do was to die at home, sitting in her old chair, surrounded by the things she loved.  That was what I wanted so to be able to give her.  Instead, during the last two years of her life, my mother had to move four times, each time culling through her things, winnowing out the closets full of clothes she loved so much until the last of her belongings fit into three large bags and a couple of boxes brought from the shared room in the nursing home where she died.

Yesterday, almost five months to the day after her death, I went through those bags and boxes.  It seemed the proper way to end the last year of her life.

As a grief counselor, I have heard many stories about the sorting of things.  Some good, some not so much. I once saw two brothers come to physical blows over their father’s ancient, ragged, and urine-filled recliner.  Things are so much more than things when they are all that is left.

Often I’m asked about the “proper time” to keep things, the “proper time” to let things go.  Of course, there is no “proper time”.  Textbooks say that leaving a dead loved one’s room untouched past the first anniversary of her death may be a symptom of “complicated grief”.  They say the same thing about getting rid of belongings within the first month.  I don’t believe either of those things.  Not professionally, not personally.

Something happens when we sort through the last tangible vestiges of the dead.  Something sad and painful and comforting and beautiful.  It is more than the memories called up by their things; it is deeper, more visceral than that.  It is something that rises and falls in its own rhythm, a rhythm not bound by time passing on a clock or a calendar.  For some, it happens with furious speed, within weeks or even days after the death.  For others, it is a slow hum of years, a largo of waiting and touching, picking up and replacing, diving in then avoiding for weeks or months or years at a time.

For me, it was yesterday.  The last afternoon of the last year of my mother’s life.  I spent it with her.  With her things.  With the clothes that no longer smelled like her no matter how I longed for them to.  With the pieces of bling and silk scarves and fuzzy socks and yellowing books of prayer she had not already dispersed to those she loved.  I touched and held and petted and stroked.  I cried.  I talked to her.  I thanked her.  I held her.  And she held me in each of those last shining bits that reflected so much of who she was.  Of who she will always be.  A strong and beautiful woman.  Gracious.  Classy.  With a wicked sharp tongue and a wit to match.  My mother.  Momma.  Mommy.

A Grief Counselor and Thanatologist with a specialization in Child and Adolescent Grief, Stephanie Rogers, GCCA-C, CT is a nationally recognized end-of life speaker and educator.

2 thoughts on “Memories and a Loved One’s Things”