When I was a child, the “D” word referred to divorce.  Back then divorce was rare. It was spoken about as almost scandalous, and it was discussed from a rather voyeuristic perspective with a ‘Peyton-Place’ intrigue.

Today, for me as an adult, the “D” word stands for something else.  I can’t even say the “D” word.  It is too painful, too final.  Instead, I say that my husband (David) passed.  It makes me feel like he is simply somewhere else, in an exquisite, sacred realm and separate existence.  That eases my pain.

I am trying to move forward, though.  I am learning to food shop for one, to cook for one, to freeze dinner portions, to eat alone at a restaurant, and to sit alone in the back car seat when out with a couple.  I have even bought myself flowers in celebration of an occasion.

There are times, however, that I find that I am not ready to deal with some things. 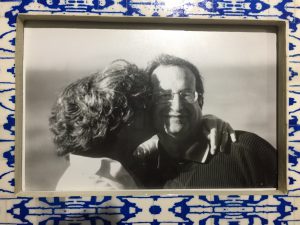 For example, when I fill out forms in a doctor’s office, I altogether skip the ‘SMWD’ section to indicate if you are single, married, widowed or divorced.  I become silently indignant.  I say to myself, “What difference does it make? They don’t really need to know that.  That’s my personal information.”  And I choose not to answer.

It has been over a year since David passed.   Recently, I have been giving thought to moving some of his clothes from the dresser.  I thought that moving his underwear and T- shirts and socks would be a benign starting place.  I joked with myself saying, “It’s not like he’s really going to need them anymore!”  So I emptied the drawers and placed the things in a bag.  I rested the bag on the bedroom floor…I wasn’t able to remove the bag from the bedroom altogether.  Next I reorganized the dresser and made use of the new found space for some of my clothes.  “There, progress!”  I told myself.

That night I had a very vivid and distressing dream.  Clearly, I was significantly impacted by what I had done.  So maybe I wasn’t ready to do anything with David’s clothes.  It was all too painful.  Who would have thought that moving underwear would be emotional?  Apparently for now it is.

Tomorrow is another day.  I believe I will know when I am comfortable making  further changes.  As for now, I have given myself permission to leave things as they are.  I know that David would be telling me to donate his clothes to someone in need. But right now I feel that I am the one in need…. and so I will hold onto them until I am ready to do otherwise.  The bag continues to sit on the bedroom floor.  Perhaps it will become my baggage… a bag with age!  I don’t know, and I’m not going to worry about it.   For the meanwhile, too, I will continue not to say the  “D” word.

I am a retired Occupational Therapist who had the blessing of a treasured second marriage (also David's second) and the misfortune of losing my husband too early to cancer. What I write comes from my heart. I write for myself as a way to hold onto David, and as a way to bring some understanding to myself of this journey. If what I express touches someone else, then that would be wonderful, and I would be honored