The morning after my mother’s death was filled with process and paperwork, made significantly easier than for many thanks to her

meticulous planning. When my father was still alive they contracted for a complete burial package including services, coffins, and interment. We allowed one full day after her death for family to travel to Florida. Calling relatives and friends was simplified by my mother’s planning; she had given me a list and told me who to count on to get the word out. One or two calls got her extensive network of cousins, and the condo association got the word out to neighbors. I still had many calls to make.

I called ‘Dave,’ a friend of forty years. They had met my parents on a cruise and had been close ever since until about ten years ago when his wife fell victim to Alzheimer’s. He was shocked to hear from me, and told me he had spoken to my mother only six days

earlier to tell her that his wife had passed away. We exchanged condolences, and when I hung up I was profoundly sad that a part of my life, my connectedness to a network of others through her was now broken. There are first cousins of hers that are my age, and yes, I will stay in touch. Around eighty of us first and second cousins on my mother’s side stay in touch via Facebook; however, right now I can’t imagine returning to that part of South Florida except for funerals.

I picked up my wife at the airport, meeting her in baggage claim. I didn’t want to wait in the car for her to come out; I wanted to be standing up and be held in her arms and comforted like a child. It was hard in  the crowd at the luggage carousel, but I found her and melted into her arms, and cried on her shoulder. Nobody seemed to notice or care. Another tearful reunion, they probably thought.

We went back to the condo and, with my brother and Susan and Joan, made the place presentable. I had decided in my heart to do something that every brain cell of my rational mind tells me is silly. I wanted her to go out of this world with the things she loved . I had found in her draw my tiny white baby shoes-I knew they were mine because my brother’s had been bronzed. She had a refrigerator magnet of the head of a Cairn terrier to always remind her of my dog, Bosco, whom she adored and watched over after my first wife died so he wouldn’t be lonely when I worked long hours. Among the other items was a great photo of my father in his WWII sailors uniform of the beach at Waikiki when he was stationed at Pearl Harbor preparing for the attack on Japan. I added photos of the grandchildren, Marc and me,  her beloved Cousin’s Circle that still meets regularly after fifty years. Doing this tore me apart. I had to stop frequently and be consoled by Wendy. I cry now just writing about it.

The next morning we went to the chapel where they gave us time to ‘view’ her before sealing the coffin for the service. Joan and

Susan had chosen the perfect outfit, a iridescent pewter blue and silver  sequined suit with black jacket. Her hair and makeup were perfect. I touched her arm where it was bare. Her skin was cold, but I still took some comfort in this contact. Then I arranged the photos and objects, fell apart a few times, and said goodbye to her body, but only her body. Marc and I had given the Rabbi much to say, and he did so wonderfully. Joan spoke with passion and reverence. I didn’t even try. I knew I could not get through one sentence.

At the mausoleum the rabbi was appropriately brief. As we walked to the tomb my wife asked me if there was anything I wanted to do. I said we should sing “Will the Circle be Unbroken.” Wendy and I sing it together at home on the porch while she plays guitar or ukulele. Joan and her friend from the Seventh Day Adventist church joined right in, their choir-trained voices resounding off of the two story high marble walls. I couldn’t find my voice at first, but, to my surprise, by the second verse it came on strong and clear. The women sang another spiritual as they slid her into the wall. My father had gone in feet first seven years ago, and now my mother went in head first and they will stay like that forever.

It is now exactly a week later, and the pain from grieving for my mother is as raw to me as it was that day. My daughter called with some great news to tell me, and after I hung up, my first thought was to call my mother and tell her. How things come around. It is exactly that impulse that inspired in both Lisa and me the idea of AfterTalk. I’m ending this here, and going to Aftertalk Private Conversations to speak my heart to my mother knowing it will keep us close forever. 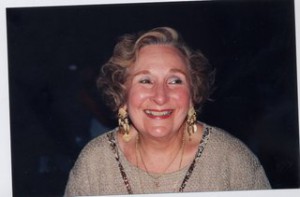 2 thoughts on “Grieving for my Mother Part 3: Will the Circle Be Unbroken”