[EDITOR’S NOTE: Renowned writer Catherine Whitney has given us permission to share with you an AfterTalk.com Private Conversation she wrote to her deceased friend Lynn. It is not only deeply moving, but also a great example of how AfterTalk members can use this site to help process their grief].

Dear Lynn,
When I stormed into your house the day before you died, my biggest fear was that you would be mad at me for coming. I had been trying to reach you for two weeks after Lee told me you had taken a turn for the worse. In your typical way, you avoided me, texting that you were fine and I should wait to come until you felt better and we could enjoy our time together. But that Sunday morning I woke at 6:00 with the clear understanding that I had to go that day. I got in my car and drove to Philadelphia. All the way down I was kicking myself for listening to you. I was your best friend. I should have gone sooner.
When I walked in and saw your face, I knew you were dying. I don’t have much close-up experience with death, but there it was in your complexion, in your faraway eyes, in your weakened body. You were surprised to see me, but you were beyond protest.
Everyone knows how much you valued your privacy and independence. Lee and Jane were hovering around, but you wouldn’t let them spend the night. You were determined right up to the end to take care of yourself. But I wasn’t budging. I imagined that we’d have “the talk” that night as we sat together. Although there wasn’t much left unsaid between us, this was a big deal: you were losing your brave two and a half year battle with uterine cancer. But we didn’t talk. It turns out there were no more words. 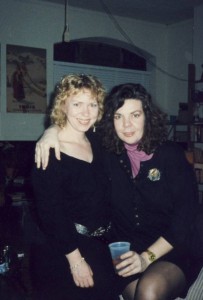 It had been so easy to believe that you’d make it because you carried yourself with such optimism and humor. You were determined not to be defined by your sickness, and you succeeded at that. Sometimes during those periods of remission you even glowed. I remember you joking that thanks to cancer you had lost twenty pounds and twenty years. The last time we were together you admitted that you didn’t know if we’d grow old together as we’d always planned, but somehow neither of us really believed it.
That last night you wouldn’t let me do anything for you, even help you to the bathroom, so when I heard a crash I feared the worse. I ran into your bedroom to find you lying on the floor. “I seem to have fallen,” you said. I replied. “Would you like a hand up?” You said yes, and I tried to lift you. I tried and tried from every angle, but I couldn’t do it. Finally I slid to the floor next to you and we sat there and started laughing. It was a ridiculous scene and when I think about it now I still laugh, even though most people would not find it funny at all. It was our last laugh together, and strange as it seems it was a perfect moment. I was so glad to be there with you. Finally, I put a pillow under your head and went to call 911 so they could lift you back into bed. Then I called your family and told them to come.
None of us were ready for how quickly the end came that Monday morning. We were in such a state of grief, and as the word spread your friends started calling and arriving. I hope you were watching the scene at the funeral parlor that day with the somber funeral director.  We told him of your wish to be cremated and to have your ashes put in the cheapest container possible. When he showed us a lovely mahogany box, Lee said, “We were thinking of a coffee can.” The horrified look on his face made us all burst out laughing.
You’ve been gone for only two months, but the reality is starting to sink in, and it’s very hard to adjust to your being gone. You were the most important presence in my life for 37 years, and I’ll never fill the hole your absence has left. We were such a bold pair in our youth, and we stayed that way into middle age. We always had a million things to laugh about, and we knew each other as well as any two people could. I always marveled at your creative genius, your goodness and the fact that you had more friends than anyone I’ve ever known. (There must have been 200 of them at your memorial service.) You’ve taken this step into eternity before me, and I wish you could tell me what it’s like. I’ve never been much of a believer, although I know you were, and your death makes me want to believe. I’m watching for you in my dreams.
Love,
Catherine