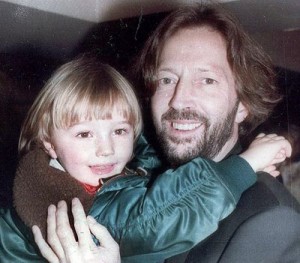 ‘I tried to heal myself’: Grieving Eric Clapton, 72, lived as a recluse in Antigua for a year after his son Conor, four, suffered a fatal 53-story fall from New York skyscraper.
He was left distraught when his four-year-old son Conor fell to his death from the 53rd floor of a New York skyscraper in a horrific freak accident in 1991. And Eric Clapton has now opened up about his heart-rending grief in the aftermath of the tragedy, revealing he flew to Antigua to spend a year living as a recluse.The musical legend, 72, isolated himself on the Caribbean island and threw himself into writing songs in a desperate attempt to ‘heal’.
Recalling the gut-wrenching days after Conor’s death, Eric said: ‘I brought him home from New York with all of the Italian side of his mother’s family and we went through the process of the funeral.’
He explained that after the funeral, he rented a cottage in Antigua where he spent almost a year playing his guitar and barely communicating with the outside world.
‘When they left, I had this little Spanish string guitar, I became attached to that I went off to Antigua and I rented a little cottage there in a community and I just swatted mosquitos all day and played this guitar and stayed there for almost a whole year, without much contact with the outside world, and I tried to heal myself,’ he said.
‘All I could do was play and write these songs and I re-wrote and re-performed them again and again and again and again until I felt like I had made some sort of move towards the surface of my being and then I was able to come out.’
The youngster had written his first letter to his father days before the accident and his mum Lory, posted it to Clapton’s London’s home – arriving after the child’s death.
Lory said: ‘The baby had learned to write a few words and he said to me, “Oh mummy, I want to write a letter to daddy, what shall I write?” I told him, “Well, write, I love you”. He wrote that and we posted it like a regular letter.
‘After Conor died, Eric and I arrived in London for the funeral. I was there when Eric received his mail just after the funeral and he opened it up and it was Conor’s letter. That is a moment I cannot forget.’
Clapton dedicated his song Tears in Heaven to Conor. It won three Grammy Awards for Best Pop Vocal Performance, Male, Song of the Year, and Record of the Year.
Eric has a daughter Ruth, 33, with ex Yvonne Kelly. He has three other daughters with his current wife Melia McEnery – Julie, 16, Ella, 14, and Sophia, 12.