A few weeks ago I published in this column a condolence letter from President Lincoln to a young woman on the occasion of her father’s passing. Readers appreciated it, so I set out to find another with the help of my trusty friend, Google. I settled on something a bit different. This is a letter from 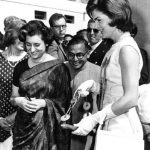 one of history’s great figures, Indira Gandhi. She was Prime Minister of India for a total of 15 years. In 1999, Indira was named “Woman of the Millennium” in a poll organised by the BBC. This letter was written to another legendary woman, Jacqueline Kennedy, on the death of her husband and our president,  John F. Kennedy in 1963. Mrs. Gandhi was herself  a victim of assassination 21 years later at the age of 67.

Those of us who were alive on that day in November of 1963 remember exactly where we were when the announcement was made. I was in my high school social studies class. My teacher, the best I ever had before college, or perhaps ever, a man with a steel rod for a spine, and enormous dignity, put his head down on his desk and wept.

Seldom has an event shocked and stunned the whole
world as did the tragedy which took place a fortnight ago. 1
wonder if there is another instance in history when a single
individual has so symbolised the hopes and aspirations of such
divergent groups and sections of people spread all over the 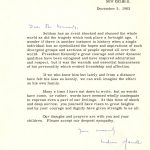 world. President Kennedy’s great courage and other dynamic
qualities have been eulogised and have inspired admiration
and respect but it was the warmth and essential humaneness
of his personality which evoked friendship and affection,

If we who knew him but lately and from a distance
have felt his loss so keenly, we can well imagine the effect
on his own family.

Many a time I have sat down to write, but no words
have come, or rather, words have seemed wholly inadequate
to express even a part of our feelings. At this time of shock
and deep sorrow, you yourself have risen to great heights
and by your courage and dignity have given strength to us all.

Our thoughts and prayers are with you and your
children. Please accept our deepest sympathy.