[Editor: a 27 year-old first year medical student was given the assignment of writing a personal reflection on an encounter he or a family member had with the healthcare system and what he might have learned from it. I thought it would be helpful to those who have lost someone to terminal cancer and wonder about the decisions they might have made. See my afternote.]

In 2009, I turned 21 years old, graduated college and found out my father had a serious brain tumor, a GBM. To those in the medical world, GBM, or glioblastoma multiforme, means certain death. My family and I were scared senseless of the diagnosis, especially at first – it’s hard not to feel terrified when Wikipedia tells you that the three-year survival rate is 7%.

Early on in the course of his illness, my father was treated at various institutions in the near our hometown in Upstate New York. He was in and out of the radiation and oncology clinics the local hospital. Though my father had a debulking surgery done at a major local Medical Center, we sought more aggressive treatment as his disease progressed. Within months of his diagnosis, he enrolled in a clinical trial for a drug called BTC at “Bigtime” University. To the public, “Bigtime’s” BTC trial represented the forefront of GBM treatment and research. To most practicing oncologists, however, they were known affectionately as “the brain tumor cowboys.” In reflecting about the course of my dad’s illness, I find that the starkest contrast between the two types physicians he was treated by (Bigtime’s “cowboys” on the one hand, and our small-town physicians on the other) was not in their treatment methods. Rather, it was what they sold: hope vs. realism. At the time, we preferred the former. Looking back, I wish we had accepted the latter. 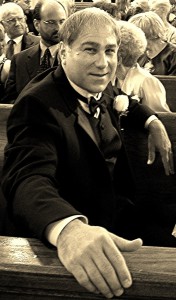 My father was exercising on a stationary bike in a gym when he had his first grand-mal seizure. He was immediately taken to the emergency room. They took an MRI. On it, they found a mass-like lesion in his left parietal lobe. Biopsy was recommended, with possible debulking if a tumor was found. Before he underwent surgery, he met with a reputable and well-liked local neurosurgeon. He and the physician had a conversation that I still remember: “Could it be an abscess?” my father asked. The surgeon replied: “Yes, it’s possible, but it doesn’t look like it. It looks like GBM, and if it is – then, well…” I vividly remember the surgeon’s next non-verbal comment. He turned his hands up, shrugged his shoulders up a bit, and fluttered his tongue with air making a “raspberries” sound. It signified one thing: bad news. Dad wasn’t freaked out; he felt like the doctor was talking to him man-to-man. My father listened to and fully understood what was being said to him. My reaction was a bit more knee-jerk, as were my brothers’ and mother’s reactions. Immediately, we bounced back and played defense. To us, the surgeon was telling us to give up. He was telling us to not have hope. My family and I eventually pulled my father on board with this philosophy – a decision that I would probably undo if I had a second chance. We reacted defensively to the surgeon because we hadn’t had any prior experience dealing with cancer in our family, let alone GBM. Furthermore, we refused to believe the surgeon. Despite the fact that we consulted relevant medical literature and sought second opinions from other oncologists, we had our own beliefs about what life had in store for my father. We sought out ‘hope’ from anyone who would give it to us. Eventually, we found some.

“Bigtime’s” BTC drug trial had plenty of hope to go around. In fact, their motto reads “At Bigtime there is Hope.” My father received regular BTC and additional chemotherapy treatments remotely at the local hospital to spare him the long journey to “Bigtime.” He did have a brief remission while receiving his Bigtime-based treatment. In the end, however, treatment failed and he relapsed. He passed away within 18 months of his initial diagnosis.

As I think back to our initial encounter with the local neurosurgeon, I realize that this wasn’t the only time we were given news to which we didn’t take well. We interacted with many other oncologists during the course of his illness, and the vast majority of them felt the same way towards Bigtime University, namely that they were selling hope. These encounters weighed much more heavily on my father than on the rest of us. Our job, we thought, was to stay positive and hopeful about his survival. We were his ‘cheerleaders.’ At many points, he wondered whether aggressive treatment was the right thing for him. We resisted this kind of thinking, as it meant ‘giving up.’ While it is true that his treatment did give us hope, as I write this reflection and look back on my dad’s illness, what I remember is that it made him incredibly sick and irritable. It changed his personality. It made care-taking for him a real struggle.

The most vivid memory I have of the whole experience with my father’s illness was at two in the morning in a hospital room. He’d just had a grand-mal seizure at home, was transported via ambulance to the ED and was subsequently admitted. I was keeping him company while he slept, and wanted to make sure he had someone he could talk to if he woke up at night. He did. He turned to me, saw that I was awake, and told me that he wanted to die. He was serious. He was ready. I told him that we needed to keep hope, and that there was still a chance for him to make it out. There wasn’t, and he knew it. I knew it. Sometimes I think he may have continued his treatment just to help us (his family) feel better – to give us hope. If I could go back and do that conversation over again, I would. If physician-assisted suicide was legal in New York at that time, I would have advocated for that. Regrettably, it was not (and still is not) legal. Instead, I might go back and advocate for him to stop chemotherapy so that he could have some peace in his last days. From conversations I have had over the past several years with my brothers and mother, I know they agree.

I find it remarkable the extent to which a physician can impact their patient’s quality of life, especially in the context of terminal illnesses. From the perspective of the local neurosurgeon, he was sharing his experience with us. I only wish he had pushed a little harder with it and tried to engage us with a little more personal interest. I do, however, understand the challenges a neurosurgeon must face in delivering bad news. How does a physician who delivers bad news help a family to accept and feel at peace with the diagnosis while at the same time not giving false hope? I believe that it is mediated by engaging with the family about this very topic in a meta-reflective way, just as I am learning more about myself and my reactions right now as I write this. To help the family understand the reality of their new illness, especially a terminal one, the physician might want to engage the family in a conversation about what the physician would do if he or she were them, and more importantly, why he or she would choose to do that. Simply put, it is important for the physician to engage with the family and explain to them what his or her experience with previous patients has been in an honest yet sensitive manner.

In walking with my father through his illness, I learned about the patient perspective. As I reflect on this experience, I see that I understand what it means to struggle with disease, to battle cancer, to face the truth of terminal illness and imminent death. I don’t carry many regrets, and my experience with my father is no different. Looking back, sure I’d like to change some things, but that’s not how life works. As it moves forward I can only hope I don’t make the same mistakes twice. At my core, I feel grateful that my father gave me that experience, and I feel a sense of privilege, honor and purpose that I will have the opportunity to apply his experience to better the lives of my future patients. It is helpful to know that I have such wonderful family, peers and mentors I can consult for advice as I proceed down my personal path to becoming a physician.

[Editor: my first father-in-law was diagnosed at age 68 with colon cancer that had metastasized to his liver. He was given less than a year to live. We took him to a world famous cancer center, and they convinced him to join a clinical trial. Had he not, he would have had perhaps eight months of palliative treatment for the pain before succumbing. Instead he had ten months of horrendous nausea, debilitation, and suffering that kept him at home until he died. Clinical trials are a vital part of medicine, and sometimes they work. It’s one of the most difficult problems families and the patient face. My only advice is that you do a lot of homework, and consult several physicians beyond those conducting the clinical trial before proceeding. I would welcome hearing from others who’ve had similar experiences.]