[Carrying On Editor’s Note: I usually prefer longer quotes, poems, etc. for AfterTalk Inspirational Weeklies, but this one resonated for me as something that everyone who has experienced a profound loss would understand.] 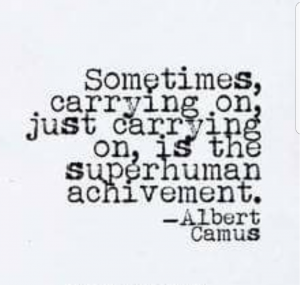 Albert Camus (1913-1960) was a representative of non-metropolitan French literature. His origin in Algeria and his experiences there in the thirties were dominating influences in his thought and work. Of semi-proletarian parents, early attached to intellectual circles of strongly revolutionary

tendencies, with a deep interest in philosophy, he came to France at the age of twenty-five. The man and the times met: Camus joined the resistance movement during the Nazi occupation and after the liberation was a columnist for the newspaper Combat. But his journalistic activities had been chiefly a response to the demands of the time; in 1947 Camus retired from political journalism and, besides writing his fiction and essays, was very active in the theatre as producer and playwright. He was awarded the Nobel Prize in 1957 for works that included The Stranger.

AfterTalk invites readers to submit their own poem, essay, or suggestions for inspirational quotes to us for publication. Please send your submission to larry@aftertalk.com