WARNING. THIS POST CONTAINS SOME HARSH LANGUAGE THAT SOME OF YOU WILL FIND OBJECTIONABLE. WE APOLOGIZE IN ADVANCE IF YOU CHOSE TO READ IT AND ARE OFFENDED.

Comedian and actor Patton Oswalt’s wife, writer Michelle McNamara,  died last year one week after her 46th birthday from a combination of prescription medications and an undiagnosed heart condition. Oswalt is an actor and comedian known for, among many things, The United States of Tara.

Thanks for making depression look like the buzzing little bully it always was. Depression is the tallest kid in the 4th grade, dinging rubber bands off the back of your head and feeling safe on the playground, knowing that no teacher is coming to help you.

But grief? Grief is Jason Statham holding that 4th grade bully’s head in a toilet and then fucking the 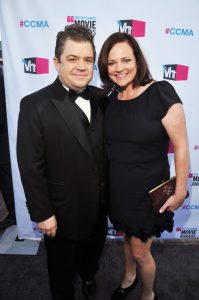 teacher you’ve got a crush on in front of the class. Grief makes depression cower behind you and apologize for being such a dick.

If you spend 102 days completely focused on ONE thing you can achieve miracles. Make a film, write a novel, get MMA ripped, kick heroin, learn a language, travel around the world. Fall in love with someone. Get ’em to love you back.

But 102 days at the mercy of grief and loss feels like 102 years and you have shit to show for it. You will not be physically healthier. You will not feel “wiser.” You will not have “closure.” You will not have “perspective” or “resilience” or “a new sense of self.” You WILL have solid knowledge of fear, exhaustion and a new appreciation for the randomness and horror of the universe. And you’ll also realize that 102 days is nothing but a warm-up for things to come.

You will have been shown new levels of humanity and grace and intelligence by your family and friends. They will show up for you, physically and emotionally, in ways which make you take careful note, and say to yourself, “Make sure to try to do that for someone else someday.” Complete strangers will send you genuinely touching messages on Facebook and Twitter, or will somehow figure out your address to send you letters which you’ll keep and re-read ’cause you can’t believe how helpful they are. And, if you’re a parent? You’ll wish you were your kid’s age, because the way they embrace despair and joy are at a purer level that you’re going to have to reconnect with, to reach backwards through years of calcified cynicism and ironic detachment.

Lose your cool, and you’re saved.

Michelle McNamara got yanked off the planet and out of life 102 days ago. She left behind an amazing unfinished book, about a horrific series of murders that everyone — including the retired homicide detectives she worked with — was sure she’d solve. The Golden State Killer. She gave him that name, in an article for Los Angeles Magazine. She was going to figure out the real name behind it.

She left Alice, her 7 year-old daughter. But not before putting the best parts of her into Alice, like beautiful music burned onto a CD and sent out into the void on a spaceship.

I was face-down and frozen for weeks. It’s 102 days later and I can confidently say I have reached a point where I’m crawling. Which, objectively, is an improvement. Maybe 102 days later I’ll be walking.

Any spare energy I’ve managed to summon since April 21st I’ve put toward finishing Michelle’s book. With a lot of help from some very amazing people. It will come out. I will let you know. It’s all her. We’re just taking what’s there and letting it tell us how to shape it. It’s amazing.

And I’m going to start telling jokes again soon. And writing. And acting in stuff and making things I like and working with friends on projects and do all the stuff I was always so privileged to get to do before the air caught fire around me and the sun died. It’s all I knew how to do before I met Michelle. I don’t know what else I’m supposed to do now without her.

Okay, I’ll start being funny again soon. What other choice do I have? Reality is in a death spiral and we seem to be living in a cackling, looming nightmare-swamp. We’re all being dragged into a shadow-realm of doom by hateful lunatics who are determined to send our planet careening into oblivion.

Hey, there’s that smile I was missing!