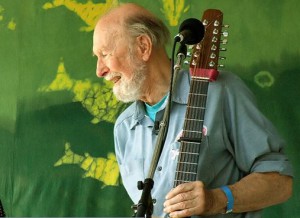 In 1919 World War I ended and both Pete Seeger and my father were born. As a young man, my Dad marched for labor Unions emboldened by the words and songs of Pete Seeger. Deep filial affection was exchanged as our voices met over Pete Seeger’s LPs. Pete Seeger was a good man; so was my Dad. My brother Kevin and I marched in the October 15th moratorium to end the Vietnam war and sang “Where Have all the Flowers Gone.” Then came the Draft Lottery and both my brothers sat with our parents, hands tightly clasped in prayer position, glued to the black and white TV as the lottery numbers where being drawn. Pete Seeger’s “Waist Deep in the Big Muddy” gave voice to our anger over the squandering of boys lives. It countered the hawks’ battle cry “My Country right or wrong”. 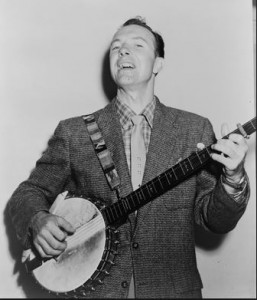 I spent hours in college stairwells playing guitar and singing folk songs, many written or sung by Pete Seeger. “We Shall Overcome” gave expression to soulful struggles personal and social.

Living along the Hudson River we watched each year as Pete Seeger would sail past on the Clearwater Sloop dedicated to cleaning up the River environment.

I loved my father, cherished his presence, and as he aged savored what I knew would someday be gone. I have felt this way about Pete Seeger as he aged. I feel the tremendous loss of that good man.

Wendy Epstein is a dermatologist in private practice, She serves on the faculty of NYU School of Medicine. She was widowed with two young children in 1992, and has since remarried.