Hoping for the Opposite of Opposite Day

From Wikipedia: Opposite Day refers to a game usually played by children. One can declare that today is Opposite Day (sometimes retroactively) to indicate something which will be said, or has just been said should be understood opposite to its original meaning.

My definition: Opposite Day is when a wedding, or similarly joyous occasion, is infused with the sorrow of not having my son Daniel there to share it. It occurs around celebrations or holidays that, prior to Daniel’s death, were festive or fun.

I am experiencing the Opposite Day phenomenon in anticipating my daughter Becky’s wedding. I’m not ambivalent about her getting 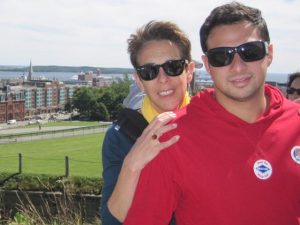 married– we love her fiancé Brian and after 10 years of dating and seven years of co-habitation marriage is all but a fait accompli. Yet, we are painfully aware that the wedding is the first extended family event since Daniel’s funeral.

Although he’s been gone for more than six years, it still seems strange Daniel won’t be there. I can’t help but picture him in attendance, in spite of his having died. In many ways, time has stood still for me since his funeral. I’m still as confused as I was when, right after his memorial service, his girlfriend turned to me and asked me for a ride back to our house. I looked at her quizzically, wondering, “Why was she asking me? Why wasn’t she asking Daniel?”

Anticipating the wedding, less than three weeks away, I am besieged with “shoulds” – Dan should be an usher; he should be getting a suit made along with his father and Becky’s fiancé, Brian; he should be preparing his toast. The ghost of what is pales next to the ghost of what should be. I’m sure my husband, Stuart, and Becky feel the same way, but we wear a mask of happiness to hide our underlying sorrow.

Speaking of masks, this wedding will occur under the specter of COVID, the creepy crown that hangs in the air at all celebrations. To make room for this unbidden guest we cut out three-quarters of the invitees, truncating the reception to a 50-person event. Yet, even small gatherings are notorious for spreading the virus. Our message to friends and family has been “You are invited, but feel free to send your regrets if you have concerns.” Even the governor of Massachusetts (where the wedding will take place) has weighed in. He decreed that anyone entering Massachusetts from the state of Pennsylvania must prove negative for COVID within 72 hours of crossing the state line. We are trying not to take any of this party pooping too personally.

Despite my trepidation I am determined to enjoy myself and dance -even if I am masked and free-styling it solo when the mother/son dance is played. I intend to have at least a few moments of unmitigated joy, the Opposite of Opposite Day.

Editor’s note:  Fran has written for us before. To read her poem, “Every Day is a Sick Day” CLICK HERE

Fran Gerstein is a clinical social worker and family therapist in Wynnewood, PA. She is well-versed in psychodynamically-oriented psychotherapy and systemic family therapy, addressing interpersonal and individual problems including anxiety, depression, eating disorders and other self-destructive behaviors. She teaches graduate students at Bryn Mawr and Philadelphia College for Osteopathic Medicine.