“Grief reunites you with what you’ve lost. It’s a merging; you go with the loved thing or person that’s going away. You follow it a far as you can go.

But finally,the grief goes away and you phase back into the world. Without him.

And you can accept that. What the hell choice is there? You cry, you continue to cry, because you don’t ever completely come back from where you went with him — a fragment broken off your pulsing, pumping heart is there still. A cut that never heals.

And if, when it happens to you over and over again in life, too much of your heart does finally go away, then you can’t feel grief any more. And then you yourself are ready to die. You’ll walk up the inclined ladder and someone else will remain behind grieving for you.”
― Philip K. Dick, Flow My Tears, the Policeman Said

Philip K. Dick was  popular among Sci-Fi readers during his lifetime. Since his death in 1982, numerous 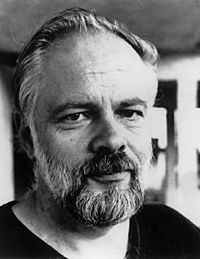 motion pictures have been made of his work, including Total Recall, Blade Runner, Minority Report (also TV show), A Scanner Darkly, The Adjustment Bureau, and the recent The Man in the High Castle. He died four months before the first film, Blade Runner, was released.