“To be grateful for all life’s blessings. . . is the best condition for a happy life.
A joke, a good meal, a fine spring day, a work of art, a human personality, a voice,
a glance — but this is not all.  For there is another kind of gratitude. . .
the feeling that makes us thankful for suffering,  for the hard and heavy things of
life,  for the deepening of our natures which perhaps only suffering can bring.”

Thomas Mann, one of the Twentieth  Century’s greatest writers and a winner of the Nobel Prize for Literature, was an outspoken opponent of Nazism.

The outbreak of World War II on 1 September 1939, prompted Mann to offer anti-Nazi speeches (in German) to the German people via the BBC. In October 1940 he began monthly broadcasts, recorded in 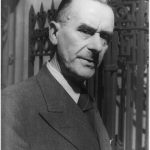 the U.S. and flown to London, where the BBC broadcast them to Germany on the longwave band. In these eight-minute addresses, Mann condemned Hitler and his “paladins” as crude philistines completely out of touch with European culture. In one noted speech he said, “The war is horrible, but it has the advantage of keeping Hitler from making speeches about culture.”